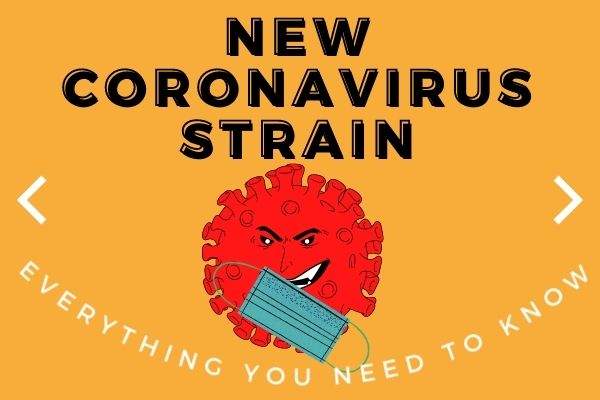 While the world is still battling the Covid-19 virus, a new, potentially more infectious variant of the novel coronavirus has been found in Britain in cases linked to South Africa.

Countries around the world have in recent days closed their borders to both Britain and South Africa following the identification of the new, fast-spreading variants of the coronavirus.

Here’s all the information about this new coronavirus strain that you might need to know:

Contents hide
1 WHAT IS THIS VARIANT CALLED AND WHY IS IT CAUSING CONCERN?
2 HOW FAR HAS IT SPREAD?
3 HAS IT HAPPENED BEFORE?
4 IS THIS STRAIN IS MORE DANGEROUS?
5 WILL VACCINES WORK AGAINST THIS STRAIN?

WHAT IS THIS VARIANT CALLED AND WHY IS IT CAUSING CONCERN?

The New strain called VUI-202012/1  (B 117) spreads 70 percent faster than the current form. This new variant is highly concerning, because it is yet more transmissible, and it appears to have mutated further.

It was first detected in September and by mid-December, two-third of covid cases were of the new strain which made it the most common form of the virus in the UK.

Three things are coming together that means it is attracting attention:

All of these come together to build a case for a virus that can spread more easily.

You can see how the variant has come to dominate the results of testing in some centers such as the Milton Keynes Lighthouse Laboratory.

HOW FAR HAS IT SPREAD?

The variant can be found across the UK, except Northern Ireland, but it is heavily concentrated in London, the South East, and eastern England. The Netherlands has also reported cases. Cases elsewhere in the country do not seem to have taken off.

Britain is already trying to curb the spread of a mutated strain of the virus which is up to 70% more transmissible, and further studies aerie being carried out on the new variant.

HAS IT HAPPENED BEFORE?

Yes, thousands of covid-19 strains are found across the world. The D614G mutation emerged in Europe in February and became the globally dominant form of the virus.

Another, called A222V, spread across Europe and was linked to people’s summer holidays in Spain.

IS THIS STRAIN IS MORE DANGEROUS?

There is no evidence to suggest that it causes a more severe disease, But with an increased rate of transmission, more people are getting covid-19. If the new variant means more people are infected more quickly, that would in turn lead to more people needing hospital treatment.

WILL VACCINES WORK AGAINST THIS STRAIN?

Yes, at least for now.

Vaccines train the immune system to attack several different parts of the virus, so even though part of the spike has mutated, the vaccines should still work.

Vaccine escape happens when the virus changes so it dodges the full effect of the vaccine and continues to infect people.

This may be the most concerning element of what is happening with the virus.

This variant is just the latest to show the virus is continuing to adapt as it infects more and more of us.

A presentation by Prof David Robertson, from the University of Glasgow on Friday, concluded: “The virus will probably be able to generate vaccine escape mutants.”

That would put us in a position similar to flu, where the vaccines need to be regularly updated. Fortunately, the vaccines we have are very easy to tweak.