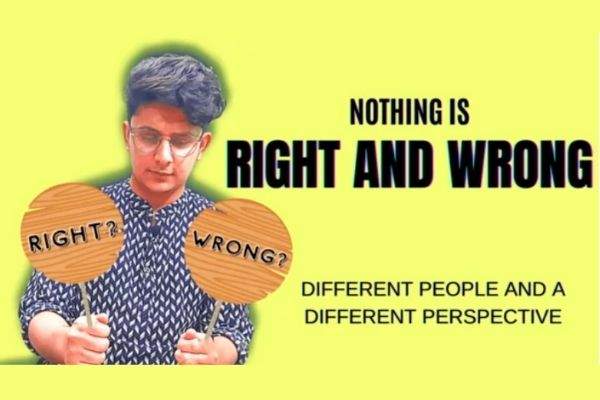 Nothing is Right or Wrong – Different people and a different perspective

Different people and a different perspective: There is a person who owns a shop and while working there comes another person who steals a loaf of bread for a starving person.

So who is right and who is wrong?

lets have a look at series of event from their seperate perspectives.

while the person who stole the loaf of bread will feel that the action is ‘right’ because he was starving.

What we tend to forget is the fact that there are 7 billion people and 7 billion points of view. So why do we say the things we say …. and do the things we do, how do we characterize it as thought-provoking, moving, and meaningful “(or criminal)? So Who decides what is just and what is untrue?? SOCIETY

Yes, Society plays an immense role in carving out one’s understanding of what’s right or wrong. Now the question is Who is society? It’s you and me. Right.

there was a very deep and meaningful thing I heard, “Every villain is a Hero in his own mind“. `

Most of us have seen the movie avengers and in that movie, there is one of the most famous villains “THANOS” (THe villain per see), Now his intention is to wipe out half of the population of the universe. And in the movie, He is considered to be wrong. No question we need to ask is was he wrong, or was he right to do that. Now most of us in all honesty would say he is wrong and from our viewpoint that looks like a sensible judgment to make. Doesn’t it. (You can comment your point of view) But in his mind, he was undoubtedly right as he had lost his home planet and everyone on it due to overcrowding and lack of resources and he was doing a favor to the universe by removing half of all life so the universe could heal itself and could maintain the equilibrium. However, to everyone else, he was a madman for thinking and trying to do what he sought out to do. there is this quote I read, “Every villain is a Hero in his own mind”.

MUST READ
Saying Goodbye to Someone You Love Is Never Easy

Universe 25 – The Most Terrifying Experiment in The History of Science

The point is the same action can be considered right

or wrong depending upon your viewpoint. (Also remember there is a difference between right wrong and criminal)

I hope you understand what I am trying to explain that before we decide what is right or wrong we need to see things from the perspective of all sides because these are concepts present in the mind of people who are judging.
The world will be a better place if we just go ahead and start listening to each other before we create a judgment of right and wrong in our minds. Nobody is different and nobody is the same. We are all humans but we each have a completely different way of comprehending what is going around us.

All of us are fighting demons among ourselves. The basis of a person’s decision making should only be justified once we listen to their side of the story. Naivety on this matter won’t take us anywhere and all it will do is separate us.

I hope this could give a sense of what we can do individually to make this world a better place. Cherish the similarities and respect the differences or as Einstein said and I quote “what we know is a drop and what we don’t know is an ocean. And listen to each other and understand.”