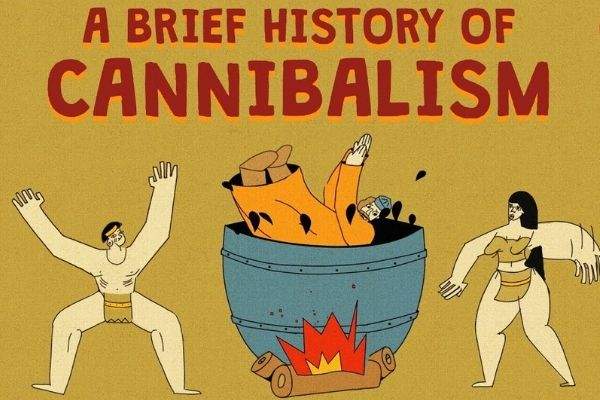 15th century Europeans believed they had hit upon a miracle cure: a remedy for epilepsy, hemorrhage, bruising, nausea, and virtually any other medical ailment. This brown powder could be mixed into drinks, made into salves, or eaten straight up. It was known as Mumia and made by grinding up mummified human flesh.

The word “cannibal” dates from the time of Christopher Columbus; in fact, Columbus may even have coined it himself. After coming ashore on the island of Guadeloupe, Columbus’ initial reports back to the Queen of Spain described the indigenous people as friendly and peaceful— though he did mention rumors of a group called the Caribs, who made violent raids and then cooked and ate their prisoners. In response, Queen Isabella granted permission to capture and enslave anyone who ate human flesh.

When the island failed to produce the gold Columbus was looking for, he began to label anyone who resisted his plundering and kidnapping as a Caribe. Somewhere along the way, the word “Carib” became “Canibe” and then “Cannibal.” First used by colonizers to dehumanize indigenous people, it has since been applied to anyone who eats human flesh. So the term comes from an account that wasn’t based on hard evidence, but cannibalism does have a real and much more complex history.

It has taken diverse forms— sometimes, as with Mumia, it doesn’t involve recognizable parts of the human body. The reasons for cannibalistic practices have varied, too. Across cultures and time periods, there’s evidence of survival cannibalism, when people living through a famine, siege, or ill-fated expedition had to either eat the bodies of the dead or starve to death themselves. But it’s also been quite common for cultures to normalize some form of eating human flesh under ordinary circumstances. Because of false accounts like Columbus’s, it’s difficult to say exactly how common cultural cannibalism has been— but there are still some examples of accepted cannibalistic practices from within the cultures practicing them.

When the Cannibalism Started? (Example)

Take the medicinal cannibalism in Europe during Columbus’s time. Starting in the 15th century, the demand for Mumia increased. At first, stolen mummies from Egypt supplied the Mumia craze, but soon the demand was too great to be sustained on Egyptian mummies alone, and opportunists stole bodies from European cemeteries to turn into Mumia. The use of Mumia continued for hundreds of years. It was listed in the Merck index, a popular medical encyclopedia, into the 20th century. And ground up mummies was far from the only remedy made from human flesh that was common throughout Europe.

Blood, in either liquid or powdered form, was used to treat epilepsy, while human liver, gall stones, oil distilled from human brains, and pulverized hearts were popular medical concoctions. In China, the written record of socially accepted cannibalism goes back almost 2,000 years.

One particularly common form of cannibalism appears to have been filial cannibalism, where adult sons and daughters would offer a piece of their own flesh to their parents. This was typically offered as a last-ditch attempt to cure a sick parent, and wasn’t fatal to their offspring— it usually involved flesh from the thigh or, less often, a finger. Cannibalistic funerary rites are another form of culturally sanctioned cannibalism.

Perhaps the best-known example came from the Fore people of New Guinea. Through the mid-20th century, members of the community would, if possible, make their funerary preferences known in advance, sometimes requesting that family members gather to consume the body after death.

Tragically, though these rituals honored the deceased, they also spread a deadly disease known as kuru through the community. Between the fictionalized stories, verifiable practices, and big gaps that still exist in our knowledge, there’s no one history of cannibalism.

But we do know that people have been eating each other, volunteering themselves to be eaten, and accusing others of eating people for millennia.