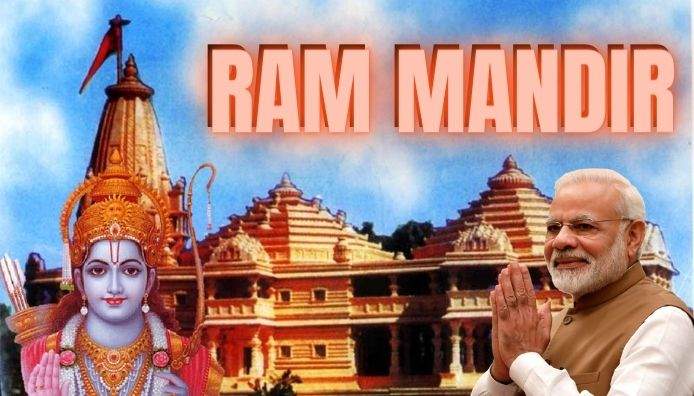 Some Interesting Things About RAM MANDIR

Ram Mandir: The main ceremony will b performed on august 5 by prime minister Narendra Modi during the auspicious muhurat. One of the interesting facts about this day is that the muhurat’s duration is 32 seconds, which will begin at 12:44:011 afternoon and end at 12:44:40 itself.

The ram Janmabhhomi Teerth Kshetra trust will place a ‘time capsule’ 2,000 feet under the ‘RAM MANDIR’ in Ayodhya. The time capsule will have a detailed history of the Ram Janmabhoomi.

Awadh Kishore Narain of Banaras Hindu University led an excavation in Ayodhya during 1959-70. he dated the establishment of Ayodhya to the early 17th century BCE and also observed that there was evidence of strong Buddhist presence in the area.

Ram temple is going to be built again in Ayodhya after 492 years. On Wednesday, prime minister Narendra Modi will start this by worshiping the land. At the same time, this will be the second time after 30 years, 9 months, and 27 days, when the foundation stone will be laid for the ram temple.

In these 492 years, Ayodhya saw many stops. The mosque was built after breaking the temple. The mosque was broken again, then broken. 167 years ago, for the first time violence took place in Ayodhya over the temple, and 162 years ago the first fir took place in this dispute. 135 years ago, the matter reached the court and 8 months, and 27 days ago, a supreme decision was made to re-enshrine Ramlala. These figures tell many stories in themselves.

As per the Hindu legend, the mythic man Manu founded Ayodhya, as recorded in the Hindu epic Ramayana. Later, it became the capital of the Suryavanshi (Sun) dynasty of which the most celebrated king was Lord Rama.

Ayodhya or Awadhpuri, the birthplace of Lord Rama has been regarded as the first one of the seven most important pilgrimage sites or Mokshdayini Sapt Puris for Hindus.

Babri Masjid was built in the year 935 of the Islamic calendar (September 1528 – September 1529 CE) by Mir Baqi, possibly a bey serving under the Mughal emperor Babur. Along with the mosques at Sambhal and Panipat, it was one of three mosques said to have been constructed in the 16th century upon Babur’s orders. It was destroyed in 1992 amid decades of tensions over the site between Muslims and Hindus

ALSO READ
What You Need To Know About Beirut Explosion