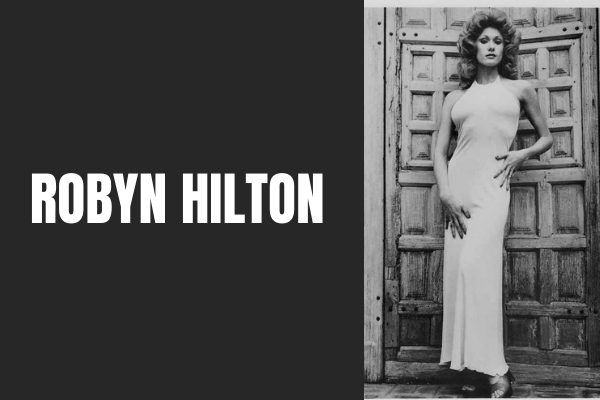 Many fans have been wondering about the whereabouts of Robyn Hilton, aka Miss Stein from Mel Brooks’ “Blazing Saddles”, who left Hollywood in the 1980s. Unfortunately, after deciding to quit acting, Robyn completely withdrew into private life, and therefore there is very little information about her recent activity. In 2016, it was reported that she filed for divorce from her second husband, Alan Mihoces, so it’s presumed that she is still alive, but leading a quiet life out of the spotlight.

Posted by Westernpunk – The Weird, Wicked and Wild West on Monday, December 30, 2013

Who is Robyn Hilton?

Robyn Hilton was born as Robyn Jo Molyneux on 13th July 1944, in Twin Falls, Idaho USA, of Cherokee Indian and Scandinavian descent. She is now a 75-year-old former model and film and television actress, who rose to popularity after appearing as Miss Stein in Mel Brooks’ 1974 satirical comedy film “Blazing Saddles”, alongside Gene Wilder and Cleavon Little. Her other notable roles include films “The Single Girls”, “Doc Savage: The Man of Bronze” and “Malibu Express”, as well as guest appearances in television series “Starsky and Hutch”, “Police Woman” and “The Rookies”. Her career was active from 1974 until 1985.

Robyn was raised in her hometown of Twin Falls by her father James Elias Molyneux, a US Army veteran who served in WWII, and her mother Erma Jeanne Upp-Molyneux. She spent most of her early years on her family’s 3000-acre farm near her hometown, but according to an interview, she always dreamed of becoming a “superstar”, and first practiced acting in front of the cows in the meadow, jokingly stating: ‘Cows are a great audience. They always stare at you very attentively’. Growing up in Idaho wasn’t easy for her; she had to help a lot around the farm, and pick up the mail from the post office half a mile away, which was especially difficult during winter.

Regarding her education, she attended Jerome High School, where she acted in most of the school plays. Having matriculated in 1958, she enrolled at Boise Junior College and Utah State University, and after graduating, she started working as a weather forecaster on Twin Falls’ local television.

Growing up in a Mormon family, Robyn’s parents disliked her idea of becoming a “superstar” and an actress. Nonetheless, she persisted and managed to save up enough money to move to Hollywood. The first acting gigs she landed were commercials for Dodge, Prell, and various other sponsors. Her first movie role, although uncredited, was in 1973’s “Wonder Woman”, however, she made a breakthrough when she appeared in Mel Brooks’ 1974 western spoof entitled “Blazing Saddles”.

The film was a huge success and turned Robyn into one of the most wanted women in Hollywood. She was deemed as ‘Hollywood’s New Sex Symbol’, and also ‘a 28-year-old blonde whose chest measurements make Raquel Welch envious’. Unfortunately, even though her amazing looks and impressive figure helped her rise to prominence with a single role, this resulted in years of typecasting. Mel Brooks himself stated that she quickly became a victim of her own looks, mainly attracting roles as dumb, beautiful girls whose only job on screen was to look pretty. Nonetheless, Robyn’s dream of becoming a superstar was coming true. At the time her first movie came out, she was dating Jewish lawyer Peter Knecht.

After her appearance in “Blazing Saddles”, Robyn became one of the most sought-after actresses in Hollywood, landing six more acting gigs in 1974 alone. Over the course of the next few years, she appeared in films such as “The Single Girls”, “Those Mad, Mad Moviemakers” and “Death Among Friends”. She also made guest appearances in shows such as “The Rookies” and “Police Women”, and was a guest in an episode of “The Tonight Show Starring Johnny Carson”.

Robyn was admired by many for her looks, so in addition to acting, she also did modeling and professional dancing – she was even featured fully clothed in two issues of “Playboy” in 1974.

However, during the very height of her popularity, Robyn decided to withdraw from Hollywood. Her last acting role was in the 1985 crime comedy film entitled “Malibu Express”, in which she played the role of Maid Marian.

When it comes to the overall wealth of the former Hollywood sex symbol and model, authoritative sources have estimated that during the height of her popularity Robyn had a net worth of around $8 million. However, due to the fact that she completely withdrew from public life, there is little information on the current state of her finances.

Concerning her personal life, Robyn was married twice and has three children. Her first marriage was to William Hilton, from 1961 until 1968, and they had two daughters. In 1990, Robyn married Alan Mihoces and changed her name to Robyn Mihoces; the two have a child together. On 25th October 2016, Robyn filed for divorce. She currently resides in Los Angeles, California.

Robyn made a breakthrough in the film and television industry thanks to her voluptuous, hourglass figure. She has blonde hair and blue eyes, is 5ft 9ins (1.75m) tall, weighs around 132lbs (60kgs), and her vital statistics are 37-25-37. She wears a dress size is 8, and the shoe size is 8.5