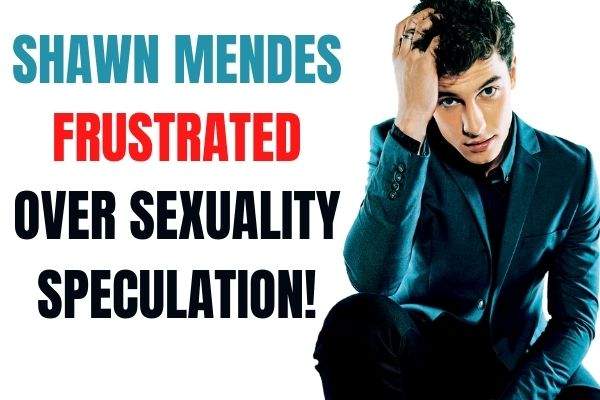 Shawn Mendes sat down with Dax Shepard on his Armchair Expert podcast and admitted to “really suffering” from the constant speculation surrounding his sexual orientation.  Ever since he made his way into the spotlight back in 2014, Shawn Mendes has been plagued with rumors about his sexuality, more specifically whether he is gay or straight.

Although Shawn has previously spoken out about his sexuality, he was finally able to open up about how the rumors have affected him during a candid interview with Dax Shepard on his Armchair Expert podcast.  And not that it’s anyone’s business, Shawn got candid with Dax and spoke openly about why it’s been “so frustrating” to address the topic about his sexuality, saying that it especially hit close to home because QUOTE, “There were some people in my life that I was very very close to, who was gay and in the closet. And I felt this real anger for those people.”

He also admitted that addressing his sexuality is essentially a double-edged sword. “It’s such a tricky thing. You’re right, you want to say, ‘I’m not gay but it’d be fine if I was gay — but also there’s nothing wrong with being gay but I’m not.’ You don’t really know how to respond to the situation.” Shawn went on to say that since he was 15years old, everyone has been calling him gay, saying, QUOTE, “I’m not gay and I’m like, ‘What does that mean?’ I had these problems with the way my voice sounded. I’m like, ‘How do I sit?’ I’m always first to cross my legs and sit with a position of this feminine style and I really suffered from that shit.” What he fears most, he explains, is QUOTE, “I think a lot of guys go through that and, even worse than that, there are so many guys who are gay and in the closet and must be hearing shit like that and being like, ‘I’m terrified to come out.’” Shawn also suggested that his upbringing could have something to do with the assumption that he’s gay, adding, “I grew up — all my cousins are girls. I didn’t grow up wrestling. I grew up getting my hair braided on New Year’sEve. It just completely depends on the way you grew up in your life and your surroundings.” He explained to Dax that there’s a “natural feeling of how to be masculine as a man,” but that it doesn’t mean that’s what it has to be all the time.

But if there’s one person who’s really helped Shawn embrace his emotions and navigate the severity of the rumors, it’s his girlfriend Camila Cabello.  “I’m in a relationship where my girlfriend is like, ‘We’re going to get in bed and you’re going to put your head on my chest and you’re going to cry into my chest. You’re going to tell me how you feel because if you don’t do that you’re just going to be an a**hole for the next week and I’m not going to deal with that shit. I’m just lucky to be in a relationship that’s it.” Above all else, Shawn is stressing the importance of expressing their feelings, saying, “Guys need to just be vulnerable. We need to cry. Stop thinking this is being brave and strong and start thinking it’s the opposite, actually.” To put it simply, he concluded by saying, “We’re holding in these emotions and not crying and being a**holes. Nothing about that is nice.” Go ahead Shawn, say it louder for the people in the back!

Be sure to let me know all your thoughts on Shawn’s interview with Dax right down here in the comments.