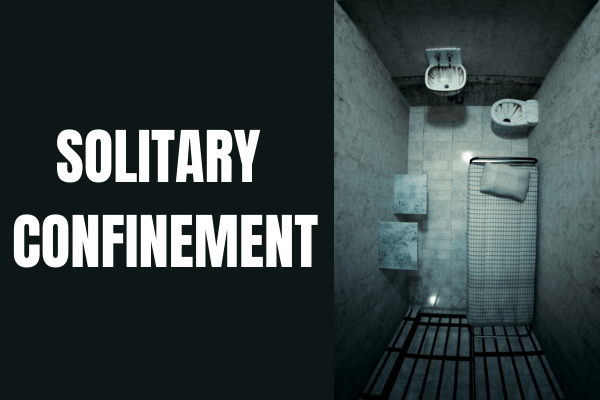 What is scarier than most people think – Solitary Confinement

Solitary Confinement: Ever thought about it? How horrifying it is? Only able to hear your own voice.

You have no idea, what it can do to you, how quickly it can kill your soul. How maddening it can be. How scary it can be.

“Lock yourself in a room. Cancel the noise. Turn the room dark. Whatever you may do, just don’t fall asleep. Don’t use your phone. No contact with anything outside the room. Feel the loneliness.”

It may seem peaceful at first. Then you will feel your mind filling up with thoughts that will chill your bone. No noise, no light, only you. People have no idea how scary it is, do you?

Solitary confinement has been reported to cause hypertension, headaches and migraines, profuse sweating, dizziness, and heart palpitations and many inmates also experience extreme weight loss due to digestion complications and abdominal pain but many of these symptoms are due to the intense anxiety and sensory deprivation.

Physicians have concluded that for those offenders who enter the prison diagnosed with a mental illness, the punishment of solitary confinement is very dangerous because the inmates are more vulnerable to exacerbating the symptoms. Research suggests that the psychological effects of solitary confinement may encompass “anxiety, depression, anger, cognitive disturbances, perceptual distortions, obsessive thoughts, paranoia, and psychosis.” The most important issue with isolating prisoners that are known to have mental disorders is that it prevents the offenders from possibly recovering. Instead, many “mentally ill prisoners decompensate in isolation, requiring emergency care or psychiatric illness.” It’s also noted that if a prisoner is restrained from interacting with the people they want to have contact with they display similar results. The lack of human touch, as well as the sensory deprivation which often go with solitary confinement, may have a severe negative effect on a man’s mental state that may lead to specific mental illnesses like depression, permanent or long-term changes to the brain structure, an existential crisis, and death.

Self-harm was seven times higher among the offenders in which seven percent of the prison population was confined in isolation. Fifty-three percent of all acts of self-harm took place in jail. “Self-harm” included, but wasn’t limited to, cutting, banging heads, self-amputations of fingers, or testicles. These inmates were in bare cells and were prone to leaping off their beds headfirst into the ground or even biting through their veins in their wrists. A main issue within the prison system and solitary confinement is the large number of inmates who turn to self-harm. One study has demonstrated that”inmates ever assigned to solitary confinement were 3.2 times as likely to commit an act of self-harm per 1,000 days at some time during their incarceration as those never assigned to solitary.” The study has concluded that there’s a direct correlation between inmates who self-harm and inmates that are punished into solitary confinement. Lots of the offenders seem to self-harm for a way to”prevent the rigors of solitary confinement.” Mental health professionals conducted a series of tests that ultimately concluded that”self-harm and possibly fatal self-harm associated with solitary confinement was higher independent of mental illness status and age group.”

What is scarier than most people think – Solitary Confinement2 thoughts on “”